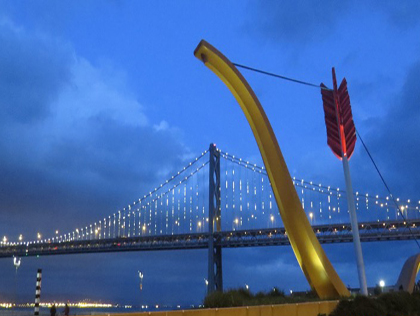 It’s often called the most wonderful time of year. But for many singles, the holidays might also be one of the loneliest. Despite all of the holiday parties, holiday lights and good cheer, many singles are dreading a Blue Christmas without a significant other. While there are many ways to escape the winter doldrums, one of the best is to pamper oneself on a holiday getaway and possibly meet that very special someone during this special time of year. Here are five of the best holiday destinations for singles in America. It won’t be snowing, and trendy swimming pools are closed, but unlike other cities everything else will be open throughout the holidays, including Christmas. That means all won’t be calm but all will be bright at any of the hottest Las Vegas bars and nightclubs. The Las Vegas Strip will be bursting with activity on Dec. 25 for one of the busiest days of the year. But the biggest party of the year is a few days later when Vegas rings in the New Year with several high-profile parties. Snoop Dog will be featured as a special DJ and performer at Tao Venetian, while Paris Hilton has a DJ set at Hyde Bellagio, John Legend has a stint at Haze at Aria, Kaskade will appear at XS at the Encore and Drake has a date at the Marquee. But that’s not all – Britney Spears continues her long running engagement at Planet Hollywood for New Year’s Eve and Tony Bennett and Lady Gaga will pair up at the Cosmopolitan’s The Chelsea. With an average high of 80 degrees, Honolulu will be an undeniable singles hotspot over the holidays. It’s also the beginning of the high season in Hawaii, as hotels, restaurants and, perhaps most importantly for singles, nightclubs and bars will be filled with tourists, some looking to meet that special someone in island paradise. Addiction Nightclub, Zanzabar and Rumours are among the top dance clubs in the Honolulu-Waikiki Beach, in addition to other great spots for singles such as Bar 35, Duke’s Canoe Club and Mai Tai Bar. Even by day, hopeful singles might be able to meet new friends simply by hanging out at Waikiki Beach, strolling through the resort hotels and upscale stores along Kalakaua Boulevard or engaging in a water sport, such as swimming with sea turtles, surfing and kayaking. Winter is one of the best times of the year for singles to visit Miami. Located in a subtropical climate, average temperatures in December are in the high 70s and precipitation is at its lowest around the holidays. The hottest nightclubs can all be found in the South Beach section of Miami. LIV, Story and Mangos Tropical Café are among the highest grossing clubs in the nation and are expected to draw huge crowds over the holidays. But even in Miami, some singles may grow tired or simply want to stay away from the nightclub scene. Other great spots in Miami for a chance encounter include Miami Beach, any of the top party hotels in South Beach, such as the Clevelander Hotel, Mondrian South Beach, the Standard Hotel and Fontainebleau Hotel.

The weather outside might be frightful but the singles scene is so delightful during the holidays in New York City. Often known as the “city that never sleeps,” New York is one of the world’s best destinations for nightlife and has a seemingly endless list of places to meet singles. For the dance club scene, Lavo NY, Marquee NY, PHD, Pacha NY and 1 Oak NYC are all great places to meet local and visiting singles. For a better place to have a conversation, visit the Village Tavern, 40/40 Club, The Delancey, The Randolph at Broome and Houston Hall. In America’s largest city, other great places to meet singles are also the most obvious, such as Central Park, most anywhere in Lower Manhattan and the world-renowned museums, such as the Guggenheim, MoMA and the Metropolitan Museum of Art. For those sticking around until the biggest party of the year, it might be difficult to move about in Times Square, but every hotel, nightclub and bar will be filled with singles for New Year’s Eve. Consistently ranked among the top cities for singles by reader polls and online and print media, the City by the Bay is a great place to be over the holidays. San Francisco doesn’t exactly measure high to the nightclub glitter from Las Vegas or Miami, but it does have a nice share of trendy dance clubs, including Bootie SF0-DNA Lounge, Ruby Skye and Mighty in addition to live music venues such as The Fillmore, The Chapel, Bimbo’s 365 and The Warfield. Other great places to meet singles in San Francisco are Golden Gate Park, Crissy Field, Fisherman’s Wharf, Union Square, the Mission District and the SoMa neighborhood.

Related: How To Spend A Long Weekend In San Francisco